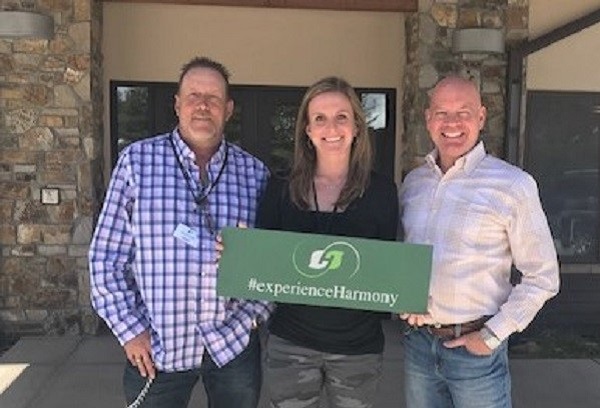 Hi everyone. Welcome to the Harmony Foundation podcast series. It’s my pleasure today to be joined with Erin Rasmussen, with Zen Mountain Sober Living for Women in Centennial, Colorado. Welcome! So good to have on campus, and on a beautiful day.

Good to be here. It’s beautiful up here. I’ve never been up here before, and I’m just blown away by the beauty. It’s really great.

You can really feel the energy, huh? I know. That’s what we love about it. And you came up at a time when we were away from the snow, the spring snow, which is good. So we’re going spend some time just chatting a little bit, a learning a little bit about you and about what motivated you to start a program for women, and hopefully give people a chance to learn more about Zen Mountain. And so, let’s talk first about you. I learned that you have a background in chemical engineering. It’s very interesting. That seems a little bit distant from the work that you’re doing today, as far as owning and running a women’s sober living. And so, how did that all come about? What was the connection there?

Well when I chose a college major, I really just wanted to make as much as I really could, with as little schooling as I could go through… so, doctor was too much. I don’t want to be in school for that long… and to make a decent living. So that’s basically what I based what my career was going to be on. Turns out that I don’t belong by myself, really, in any case or scenario. And so behind a desk, at a computer all day, and in a cubicle, wasn’t really cutting it for me. I was really unhappy at work. Then when I got into recovery, I spent a couple of years dabbling in other types of work. But eventually, I actually went to sober living my third time around in treatment, and it changed my entire life. When I left there, I felt like I could be out in the world and not feel like I was going to drink at any moment. And so even being in sober living, I would think, “Wow, this would be a really cool, like, life thing to do; something to do with my whole life.”

And so after a few years of solid recovery under my belt, I just thought, “Why not give it a try?” If I don’t do it now, I’m probably never going to do it. And so I gave it a shot, didn’t really know if it was going to work, but I knew my heart was in the right place. And so I gave it a go and we’ve been pretty successful so far; helped a lot of women so far; and have two houses open already in just a little over a year’s time.

Well that’s a great segue into talking a little bit more about the nature of Zen Mountain. First of all, I love the name. And I have yet to see it, but I do make every intention of coming out and seeing it. But the people that I’ve talked to who have seen it say it’s just the most serene, and most safe and comfortable and welcoming, space that they’ve been to. And it’s not easy to find that. It’s hard to find that. Tell me a little bit about the origin of the name. What made you decide to call it Zen Mountain?

You know, it’s really funny because one day I was just thinking of potential names. I went through probably several months of just thinking, “What would be a cool name for a sober living home, especially for women?” And it just popped into my head one day.

And then, for marketing’s sake, I wanted to go to Google and look up if there’s a “Zen Mountain” anything. And I got on there and it’s actually the name of a monastery. And so I thought… meditation, monastery, spiritual… that works for what I want it to be. And I didn’t want our homes to feel manufactured, like some sober livings feel. I wanted them to have a lot of personal touches, a lot of just really homey accents, and the energy is not… I didn’t build that. The women living there did.

Oh, I love that. It’s about the people, isn’t it? That’s great. That’s fantastic. Your website talks about pure recovery support, engagement in sober fun, which are really vital for good recovery. If an individual were coming to access services, and to become a resident at Zen Mountain, what would that look for them? If they were coming to your program?

Really, the first month we watch over them very closely. We’re pretty darn structured the first month. Curfew’s pretty early. It’s at nine o’clock, unless they’re working or at a meeting. But we really try to expose them, early on, to ideas of fun and getting out into the world that they may have never tried before. Or that they haven’t done in a long time, haven’t done since they were young, maybe. And that’s where… The things we did when we were kids, that’s genuine fun. The stuff that doesn’t involve drinking, like doing arcade games or… One of the girls went go-cart racing with a friend the other night. Bowling. All of that kind of stuff that’s real fun. Concerts, sporting events. We plan to go tubing down the Platte River this summer. Just really all kinds of stuff to expose them to as many options of as many fun things that we can, during their time with us.

Just tapping into that childlike wonder that they probably had a long time ago and forgot about.

And we do a game night, probably, once every few weeks/once a month. We get pizza and we play games, and a lot of our girls really don’t remember how fun just playing a game can be. And we get loud and crazy and silly, and it’s just a blast.

It sounds like you’ve created a great environment, not just for folks outside the community, but for you as well, which is so important as we’re building our tribe, especially in early recovery. So we’re always interested in getting to know the people behind the program, so I’m going to ask you a couple personal questions. What has been a purchase you’ve made that is $100 or less, in the last six months, that has been beneficial to you?

In the last six months? I don’t know… probably gas for my motorcycle? It’s a new hobby that I just took up, not many months ago. And so I’m still brand new at it, but it’s one of my favorite things to do. I really hope to get more into it this summer. I’ve always been a thrill seeker. I think it’s pretty common for people with past addiction problems to gravitate towards those types of activities. But it’s just very freeing. I don’t think you can explain what it feels like to ride a motorcycle to someone that has never ridden before. It took forever for me to get on the back of my boyfriend’s motorcycle. But it wasn’t too long after that I was like, “I want my own.” Independent woman, I want my own.

Good for you. Well kudos to you, I’m not sure if I’m ready for that yet. If I were to play off the word harmony, what do you think it means to live a life in harmony?

I think of all pieces of one’s self being in balance with each other, not so much being in balance with your surroundings. But the whole idea that we really see as important at Zen Mountain is that balance of mind, body and spirit, and how those three work in conjunction together. And how often we see addiction, and mental health, and any other co-occurring trauma, and any of that stuff… It’s all about getting the whole person well, and getting the whole person to a place… getting myself to a place where I just feel serene and at peace.

Oh, nice. I like that. Thank you for sharing that. And it’s been great having you on campus, and to give you a chance to talk to folks from Harmony, and also to learn more about Zen Mountain. If folks are listening today on the podcast and wanted to know how to access your services, how could they get in touch with you?