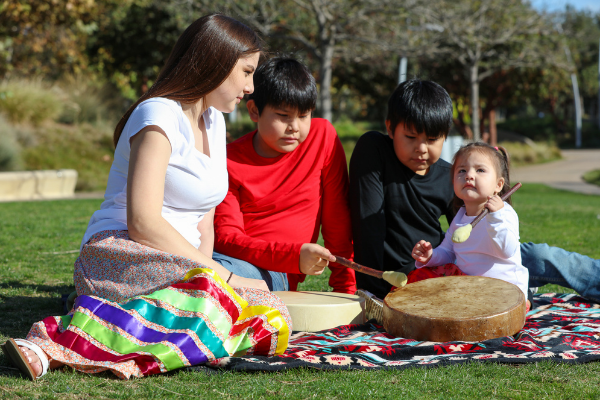 Although the Native American population of the United States remains relatively small compared to other ethnic groups, indigenous people struggle disproportionately with a vast range of health and social issues—including substance misuse.

Swaim and Stanley found that lifetime and last-30-day substance use rates and relative risk were significantly higher for nearly all substances among American Indian youths.

“The harm associated with high rates of use and early initiation for American Indian youths includes increasing rates of use in early and later adulthood, higher risk of developing a substance use disorder, and more alcohol-related problems, including alcohol-attributable death. Furthermore, American Indian and Alaska Native youths are more likely to need treatment for a substance use problem than all other US racial/ethnic groups.”

In a recent presentation for Harmony Foundation, Don Coyhis, the founder and president of White Bison—a nonprofit company dedicated to creating and sustaining a grassroots “Wellbriety” movement that provides culturally based healing for indigenous people—explained the historical background of this addiction crisis and pointed out culturally specific ways to tackle it.

According to the White Bison vision statement, “Wellbriety means to be sober and well. Wellbriety teaches that we must find sobriety from addictions to alcohol and other drugs and recover from the harmful effects of drugs and alcohol on individuals, families, and whole communities. The ‘Well’ part of Wellbriety is the inspiration to go on beyond sobriety and recovery, committing to a life of wellness and healing everyday.”

In the case of Native Americans, entire communities have been traumatized by a dramatic loss of their culture and forced assimilation. Don Coyhis blames the infamous boarding schools of the 19th and 20th centuries in particular.

Between the 1870s and 1960s, over 100,000 Native American children were sent to nearly 500 boarding schools across the United States. They were largely modeled after the flagship United States Indian Industrial School in Carlisle, Pennsylvania, founded in 1879.

Officially justified as a path for Native Americans to achieve equality with European-Americans by immersing students into mainstream American culture, Carlisle and similar schools remain deeply controversial today as they forced children to leave their families at young ages and give up their indigenous cultures, languages, religious and spiritual beliefs, and even their names, thus traumatizing generations of Native people.

The boarding schools unleashed “seven generations of intergenerational trauma,” says Coyhis. The traumatic experience of the boarding schools did not only affect individual students but also their descendants to this day. There are now strong indications that trauma can be passed on genetically to subsequent generations.

“Today the hypothesis that an individual’s experience might alter the cells and behavior of their children and grandchildren has become widely accepted,” wrote Andrew Curry in Science in 2019.  “In animals, exposure to stress, cold, or high-fat diets has been shown to trigger metabolic changes in later generations. And small studies in humans exposed to traumatic conditions—among them the children of Holocaust survivors—suggest subtle biological and health changes in their children.”

The boarding school period destroyed those structures and instead laid a foundation of anger, guilt, shame, and fear leading to substance misuse, mental illness, suicide, sexual and child abuse. “Many thousand Native Americans grew up with early childhood trauma,” said Coyhis. “This led to lateral violence and addiction.”

Healing begins with understanding the past and reconnecting with the indigenous value system. The Wellbriety method is about re-engaging with a Native worldview focused on harmony with the Earth. Understanding the historical trauma can be seen as the first step for Native Americans to break the cycle of anger, shame, substance misuse, and violence.

They need to process the loss of their culture, their land, their language, and basically their entire way of life. To heal this trauma, White Bison’s Wellbriety offers four directions of healing to counter intergenerational trauma, jealousy (family rivalries), early childhood trauma, and unresolved grief. “There is so much death in our communities,” said Coyhis, “and not only from old age.”

Intergenerational trauma has to be treated with intergenerational healing, “a combination of immense healing, community training, and a return to the ceremonies, spirituality, and the cultural ways of our people” by bringing back:

This reversal is based on the traditional indigenous worldview of four elemental concepts at the cardinal directions: Fire (white) in the north, the land (red) in the east, air (yellow) in the south, and water (black) in the west. Each cardinal point represents important teachings for Native Americans. Walking the “Red Road” of healing involves finding the Creator (red), finding your Self (yellow), finding your relatives (black), and finding the wisdom of the elders (white).

This traditional indigenous philosophy was renewed at a meeting of elders in the early 1990s which predicted a time of healing in the future, explained Coyhis. It was prophesied that the healing time would come when an eagle lands on the moon. When the elders heard Neil Armstrong reporting from the lunar surface in 1969 that “the Eagle has landed,” they took that to mean that the healing time would begin.

Another vision saw a spider build a web all around the globe and a woman would come to speak on the web and she would be heard around the world. The launch of the world wide web on the internet in the 1990s is considered to be the fulfillment of that prophecy.

These native visions counter trauma and despair with belonging and hope. “The Sacred Hoop can bring the four directions together, allowing for forgiving the unforgivable, unity, healing, and hope,” said Coyhis. Only this kind of holistic approach can break the cycle of intergenerational trauma.

Harmony has long utilized a holistic approach to healing trauma and addiction as well. Realizing that addiction is a biopsychosocial and spiritual disease, Harmony’s treatment program promotes physical, emotional, and spiritual healing, empowering patients to embark upon a lifelong journey of recovery.

If you or a loved one are struggling with alcohol or drug addiction, or you have questions about our programs, call us today at 970.432.8075 to get the help needed as soon as possible. Our experienced staff is available 24 hours a day, 7 days a week